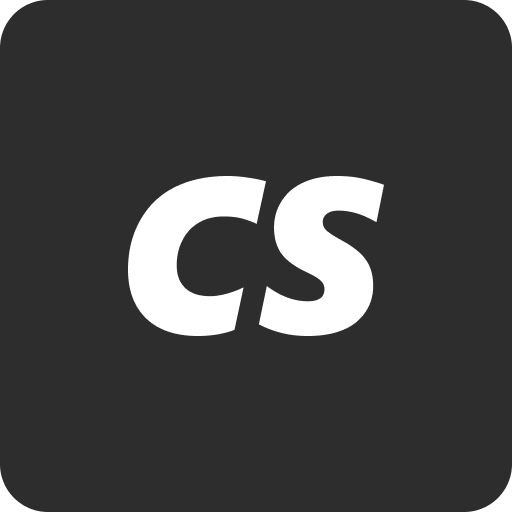 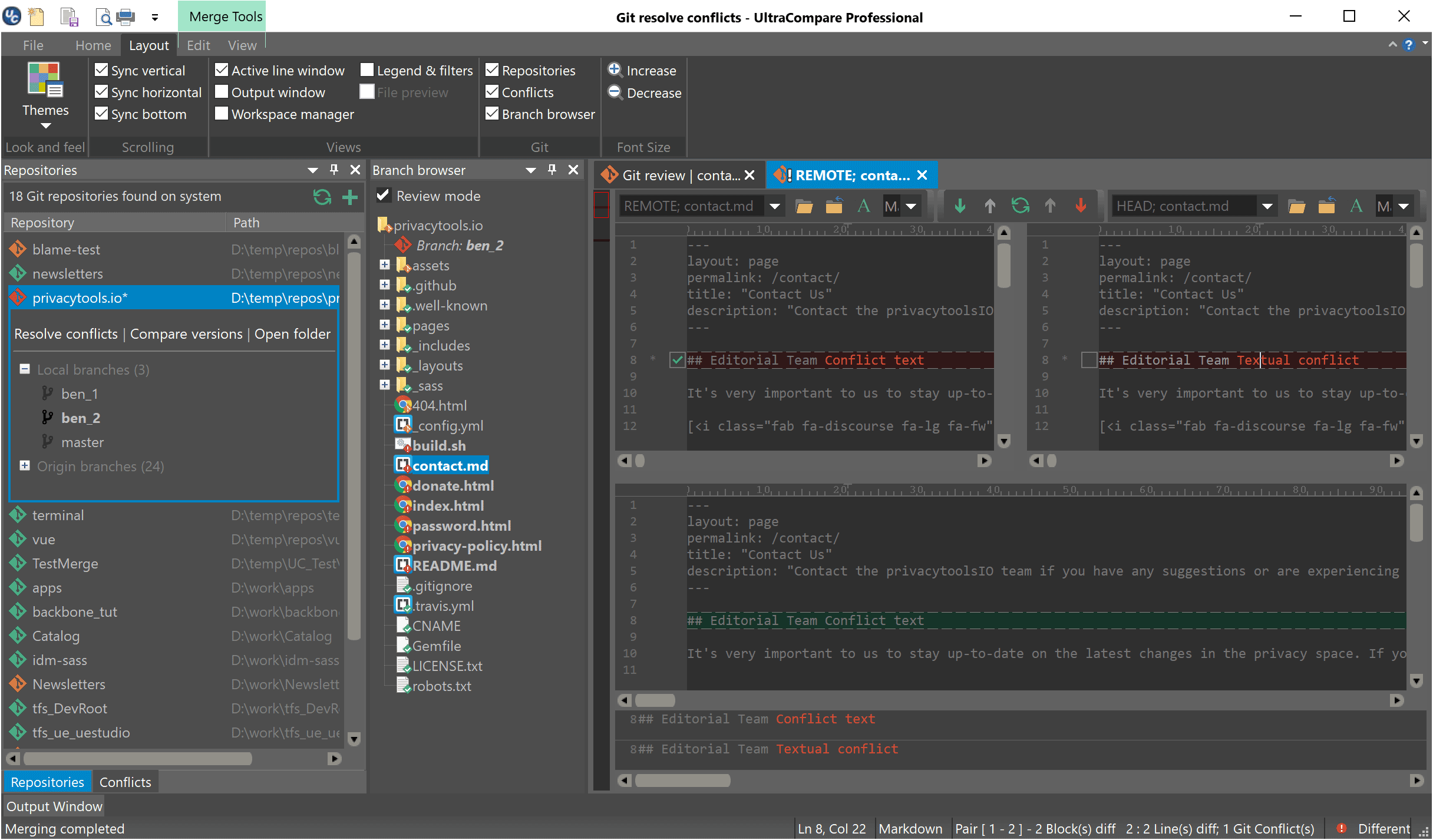 The new Git integration in UltraCompare has several components:

UltraCompare will automatically populate the user name and email fields with the information from the .gitconfig file on your system. You can modify what is detected here or change it later in Settings » Git integration. 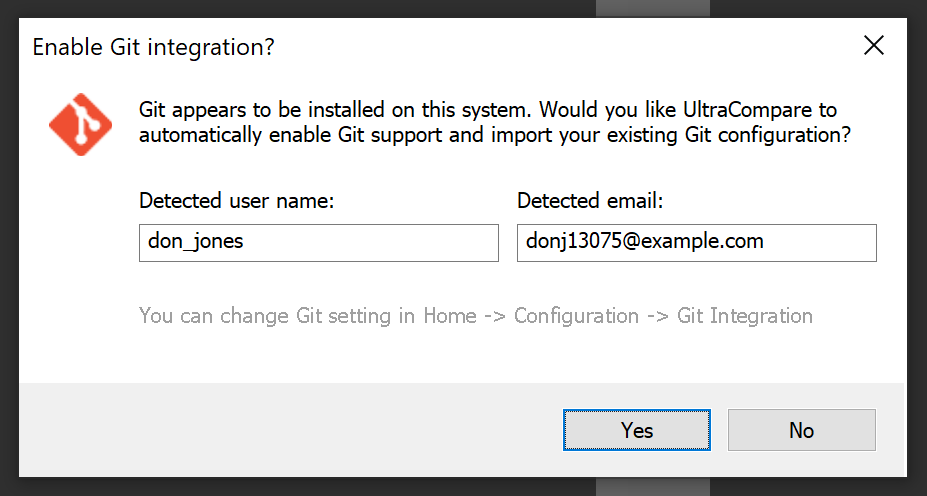 You can toggle the visibility of the Repositories window in the new “Git” group in the Layout ribbon.

The Repositories window is a list of all Git repositories UltraCompare has detected on your system, as well as all local and remote branches for the active / selected repository. On first run, UltraCompare will scan all attached local / internal storage drives for Git repositories and show them here. If you have Git repositories on other drives (for example, a USB drive or a network share) that UltraCompare doesn’t detect, you can add them by clicking the + button at the top-right of this window.

You can remove a repository from the Repositories list by right-clicking on it and selecting “Hide”. You can also manually add or remove locations to be ignored for Git repository scanning in Settings » Git integration by clicking the Exclude folders… button.

The repositories are shown with a Git icon in one of three possible states:

The selected repository within the Repositories pane is considered the active repository. When selected, the repository is highlighted and shown with the following options:

Additionally, a list of all local and remote branches are shown underneath the selected repository, with the active branch shown in bold. The list of remote branches is collapsed by default. You can easily checkout a different branch by double-clicking on it.

You can toggle the visibility of the Branch browser window in the new “Git” group in the Layout ribbon.

The Branch browser window provides you with a tree-style file listing of the active repository and branch. You can explore the files within the repository’s working directory, as well as see the Git status of individual files via the Git icon overlays.

The Review mode checkbox at the top of the branch browser allows you to toggle a special “Git review” session. With this enabled, clicking a file in the branch browser will open a read-only compare of the working copy of the file against the repository version, so you can see what uncommitted changes are in the file.

The context menu in the Branch browser offers the following options:

You can toggle the visibility of the Conflicts window in the new “Git” group in the Layout ribbon.

The Conflicts window includes a list of all files containing Git merge conflicts within the active repository (see Repositories window section). The “Folder” field shows the full path to the folder on the local file system. You can use the Open button to open a folder anywhere on the file system that contains Git conflicts.

For the selected conflict file, UltraCompare provides the following options: 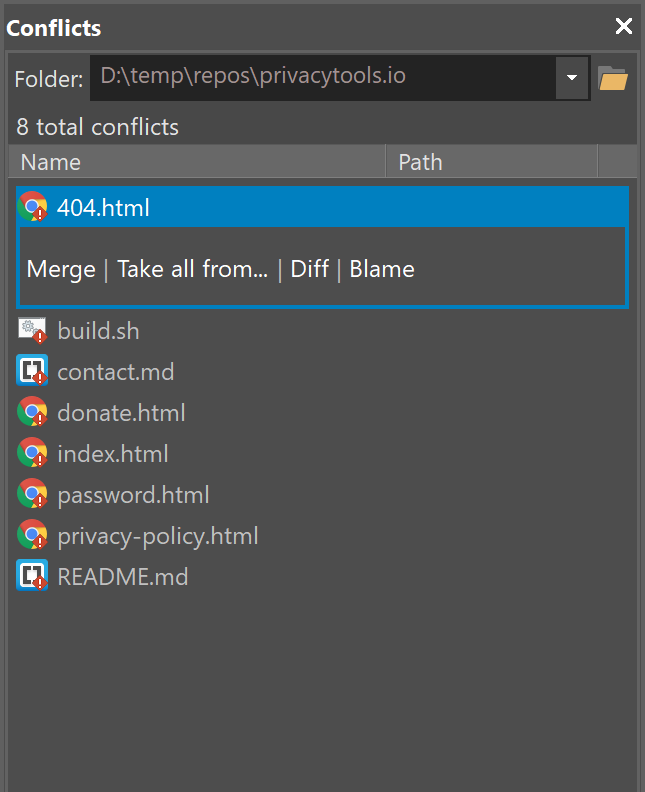 You can see Git repository information directly in the Explorer tab of the Workspace Manager. The parent folder of a Git repository, as well as all items within it, are shown with special Git icon overlays which indicate the item state:

Additionally, you can right-click on the top-level Git folder, or any item within it, to access a “Git” sub-menu in the context menu.

When you have a Git repository with merge conflicts, you can use UltraCompare to diff, view, and resolve these conflicts. You can do this via one of two ways: Git’s mergetool feature, or native conflict resolution.. 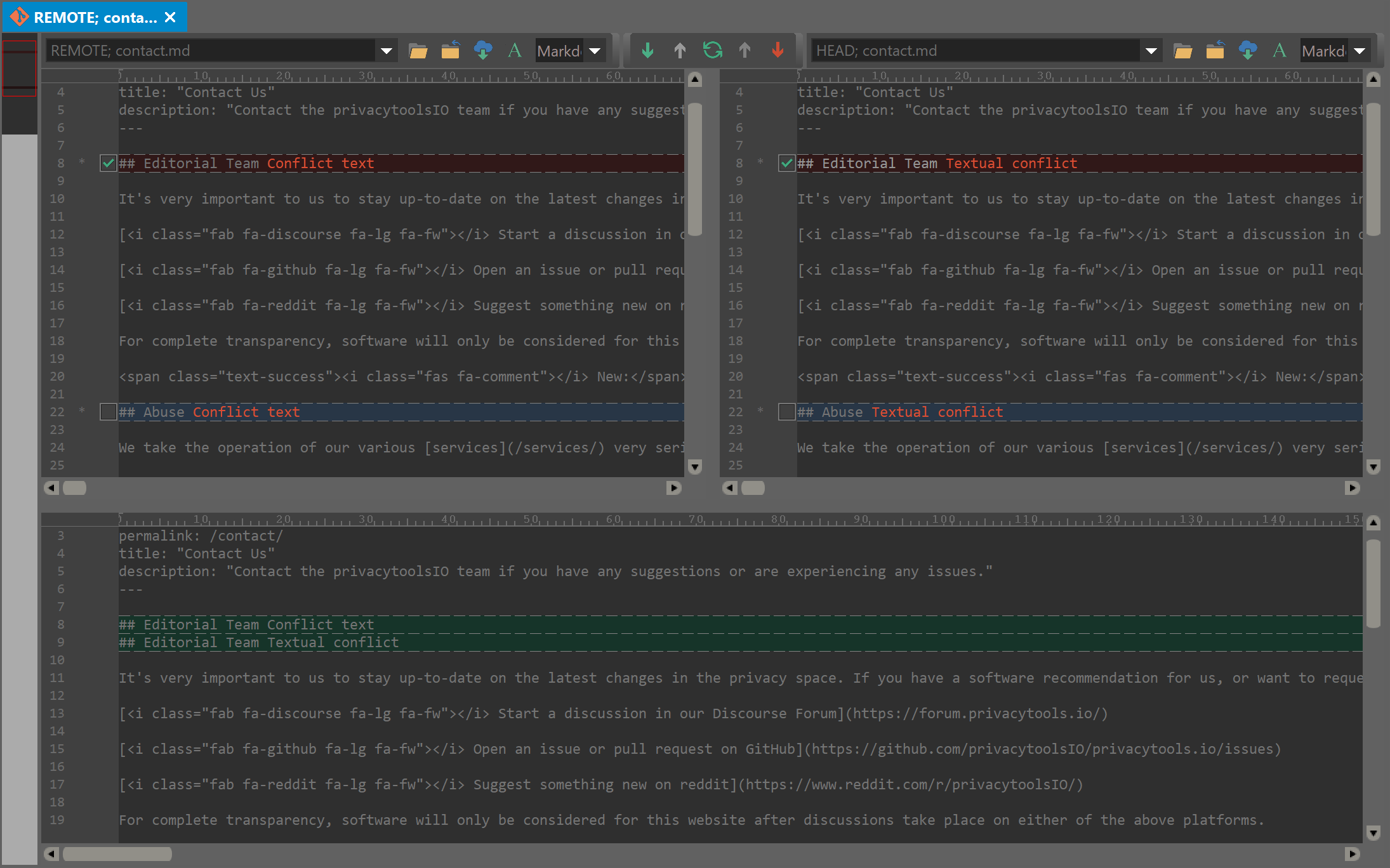 To set UltraCompare as Git’s mergetool on your system, see the Git mergetool / difftool support section. No configuration is required to use UltraCompare’s native conflict resolution functionality.

To resolve conflicts for a particular file, you can do one of the following:

Doing one of the above will open a new “Resolve conflicts” session, with a special three-pane layout for conflicts resolution:

UltraCompare adds a checkbox inside the line number margin for each conflict between the local and remote versions. You can use this checkbox to select which difference block – local, remote, or both – is added to the merged result. If you select both differences, the one you checked first will be added above the other.

You can use the red “Next conflict” and “Previous conflict” arrows in the navigation control bar above the panes to quickly cycle through the conflicts in the file.

In this mode, you cannot edit the local and remote versions of the file; they are read-only. However, you can modify the result file in the bottom frame as desired during the session. At any point during a “Resolve conflicts” session, you can press Ctrl + S to save your changes to the file up to that point.

Once you have resolved all conflicts to your liking, you can close the session. UltraCompare will ask you whether or not to mark the file as resolved. If you say yes, the file is staged as though all conflicts are resolved, and you can commit it externally towards completion of the Git merge.

Often it’s useful to compare a file from a Git repository to a previous version of itself. UltraCompare makes this possible with the new “Git version compare.”

You can launch a version compare by one of the following methods:

Once the commits have been selected, you can press the green Play button to run the version compare. You can use the “Next diff” and “Previous diff” arrows in the navigation control bar above the panes to navigate throughout the differences. However, this is a read-only compare so merging between the two files is not possible.

While in version compare mode, UltraCompare will also show a “Git blame” tooltip for differences in both frames. To see this tooltip, simply hover next to the line number in the margin.

UltraCompare supports Git’s difftool and mergetool features by introducing new command line parameters. You can automatically enable UC as difftool / mergetool for Git by going to Settings » Git Integration and checking the option Set UltraCompare as diff/merge tool for all repositories.

If you wish to set up difftool manually in the .gitconfig file, you can use the following:

To manually set UC as mergetool in the .gitconfig file, use the following:

The following options are available under Settings » Git Integration: 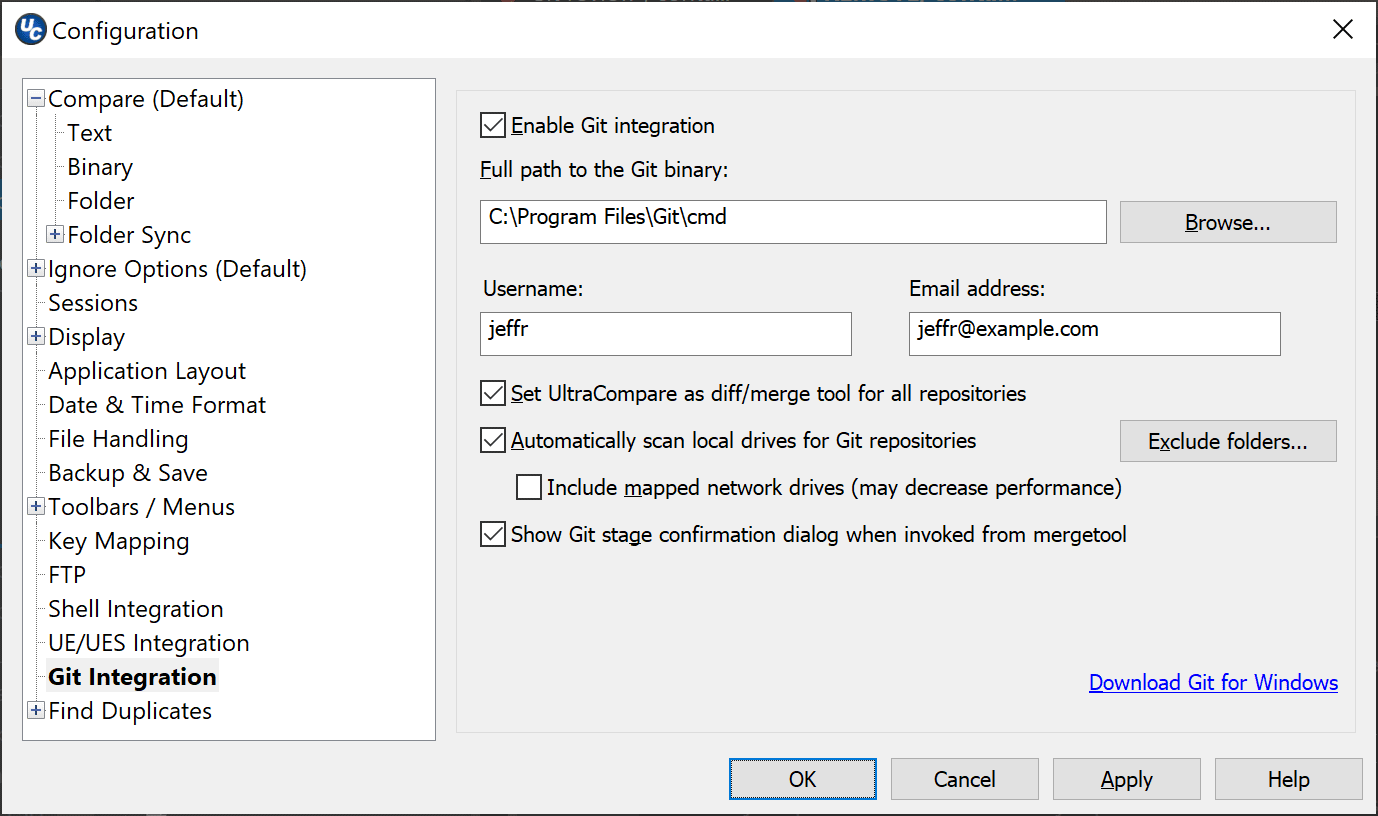